Since the reading is an approximation, I created an offset variable to compensate for the difference between the actual temperature to what the Micro:bit thought the temperature was.

The TempC variable is sent over the radio to the receiving Micro:bit in my living room. The Micro:bit will play a song of the temperature falls below 0 Celcius. 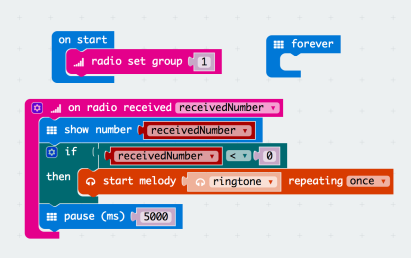 The receiving code is straightforward. After setting the radio group in the On Start block, the Micro:bit just waits for a received number. If the number is less than zero, a tune is played.

I found two interesting posts; one to transmit data to a website and another to integrate with IFTTT. So more to follow.