The Straw Camera was a joint venture by Mick and myself started in 2007. We were motivated by our mutual interest in creating images in the most direct manner possible. Mick in particular had an active interest in pinhole image making. On a summer school course we converted a Polaroid camera to a pinhole and had some fun with 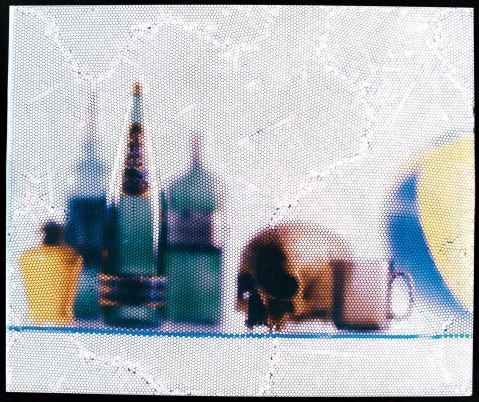 But there is very little in common between the pinhole camera and a straw camera. The pinhole gives an entire image from a single point perspective. The Straw Camera, which is a box stacked with approximately 23,000 black drinking straws, produces a multipoint perspective from an array. The light viewed/collected by each individual tube is recorded onto the photo sensitive material placed at the opposite end. By going straight on to paper, it is a direct analogue process.

We talked things over and lashed up a small box prototype to test. That worked and we decided that it might prove interesting to make a bigger camera, so we built a 20 X 24 inch camera. After initial tests with black and white we used colour paper as a negative. Then we contact printed to another sheet of colour paper (both without maker’s logos on the back), finishing up with a positive image.  http://strawcamera.com/